Recently I came across the need of joining multiple excel files in Tableau. I did a hard research on how to do it. However, most of the instructions I found were about how to join two tabs(worksheets) in the same excel workbook. In this post, I will describe how to join multiple worksheets from different workbooks, which spent me about one hour to figure out. Please note the instructions here work for Tableau Desktop 9.0 or later.

Suppose we have one Excel workbook that contains one worksheet that would be joined with another worksheet in another workbook. For example, there is a ‘Connections’ worksheet in workbook ‘testjoin01.xlsx’, recording the origin, destination, and travel times. 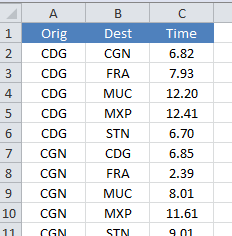 We want to join it with the ‘Nodes’ worksheet in workbook ‘testjoin02.xlsx’. The sheet stores latitude and longitude of associated nodes.

Use Custom SQL to Create the Join

Open a new Tableau workbook, select Excel in the Connect To a file section. Find the ‘testjoin01.xlsx’ workbook, and click the drop-down arrow next to Open, and select Open with Legacy Connection.

Drag the New Custom SQL table from the left pane to the join area.

In the custom SQL query field, copy and paste a LEFT JOIN query similar to the one shown below, change and update to your use case.